The Savannah X has been nominated as a finalist in the Camper Trailer of the Year 2018 awards!  Check out the CTOTY 2018 Comments below to see what they had to say.  For the video review, head to the Videos tab.

Do you love the forward fold camper format but just need a bit more space? If you’re taking the family camping, check out the new Savannah Rear Slide, Forward Fold camper with all the features you love about the original forward fold, plus TWO queen size beds! This is not your typical knock together Camper Trailer Package.

This is a FULLY WELDED AND BAKED ENAMEL Camper Trailer without the price tag. Many trailers with lesser specifications than this one sell up in the $30000+ price bracket. The trailer is fitted with our fully optioned 16oz Australian spec canvas. 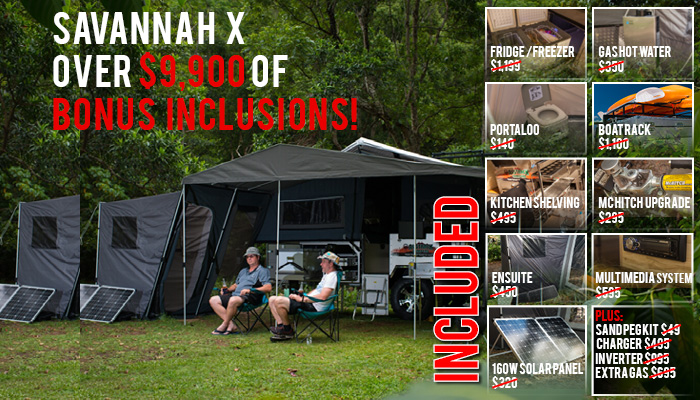 INCLUDES THIS AND MORE! 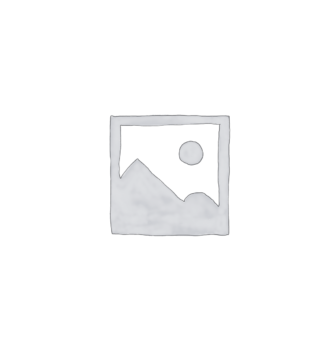 *Conditions, fees and charges apply. Rate subject to change without notice. ^Comparison rate calculated on a loan amount of $30,000 secured over a term of 5 years based on monthly repayments. WARNING: This comparison rate applies only to examples given. Different amounts and terms will result in different comparison rates. Costs such as redraw or early repayment fees and cost savings such as fee waivers are not included in the comparison rate, but may influence the cost of the loan. Finance is subject to lenders lending criteria. Assistance provided by AAA Finance and Insurance Australian Credit Licence 422959.

The Austrack Savannah X isn’t the first forward fold, rear slide camper I’ve seen, but it is the first one I’ve liked. It’s a novel idea that offers a half way point between the large twin fold campers, and the relatively compact forward folds. A queen bed, a lounge area, and a double bed, all within the standard forward fold footprint. It’s a hell of an enticing prospect.

Setting up the Savannah X is a simple affair. Yank the top over, pop in a few poles before moving to the rear. The rear slide section literally slides out into place, gas struts on the hoop pop it easily into place as well. From start to finish the extra bed adds less than a minute or two to setup times. Of course, it’s not just all about the second bed either.

Austrack pride themselves on going the extra mile and it’s shown in everything they do. Even the front face of the camper has off-set poles to keep the canvas straighter, and the awning easier to attach. They’ve included all the gear as standard too, so there’s no need to go shopping for items like fridges, toilets, or hot water systems. They’ve even gone as far as installing a second gas bayonet specifically if you bring a small BBQ along for the ride.

The one downside is the ensuite is attached to the awning. They’re hardly the only offender, and if you use the awning every time you camp it won’t be an issue. But if you prefer the quick setup you might find yourself getting acquainted with nature when it calls.

When we judges pulled up to the Austrack camp at CTOTY, the boys introduced the Savannah X as the ‘burger with the lot’. The fact I gave it 9/10 for suitability for intended purpose goes to show I reckon they nailed that brief! This camper is a forward fold, rear slide hard floor that is ready to hitch up and take adventuring from the day you collect it.

Designed for families, it has room to sleep six within the main body of the camper. Add a massive awning with a full set of walls and floor plus a large, family-friendly ensuite tent and you’ve got a palatial footprint perfect for long, lazy days enjoying the great outdoors. The stuff childhood memories are made of. And life is made easy for mum and dad, too. Gas hot water, plenty of storage, large water capacity, a functional kitchen and a sturdy construction to ensure you’ll have few troubles on the tracks.

The Austrack Savannah X is a well-built and finely detailed forwardfold camper. It is built on a sturdy 100 x 50 x 3mm chassis and 120 x 50 x 4mm drawbar, all fully welded and hot dip galvanised, while the body is zincanneal steel with underbody deadener to protect the underpinnings from gibbers and grit. The canvas is 16oz plain weave, with heat-sealed dual stitching throughout.

All windows have internal covers and midgy screens, and all externally exposed windows have gusseted awnings. There is an automatically-erecting aluminised nylon tropical roof which does a good job of keeping the living area underneath cool. The extended awning, which covers the rear bed extension, also provides for a big area under canvas, and it can all remain attached during pack-up for ease of set-up next time around.

A mix of aluminium and steel poles are used for lightness where handy and strength where it would be needed. For a rear slide forwardfold camper the Savannah X is relatively light at 1440kg, with a 120kg ball weight. The gross weight is 2000kg, giving a useful load capacity of 560kg. With a fully adjustable dual shock trailing arm suspension and 12in electric brakes, six-stud 16in alloy wheels (including two spares) and all terrain tyres, all with excellent ground clearance, this is a camper that is well set-up for offroad work.

The 3.5 tonne McHitch coupling only adds to its offroad Serviceability. The polished checkerplate stone guard does a good job of shielding the front of the bodywork.

I simply cannot believe the amount being offered for the price; and it’s not a compilation of cheap accessories – this is seriously a high quality package. The Savannah X really is a home away from home with a huge host of extra’s that will make your next holiday a Hit. The storage facilities are terrific. Immediately to the left of the staircase is the pantry and pole carrier with two large sliding drawers for your pots, pans and non-perishables. In a separate compartment we find a 75 litre EvaKool dual zone, double lid fridge/freezer set on quality slides and fully ventilated.

The EvaKool is part of the package price for the Savannah X increasing the value package even further. The pantry cabinet is extended right through the width with more storage on the opposite side and a huge container that is large enough for generators, recovery gear the porta potti that is also included in the Price. There’s plenty of power to run the Savanah X plus all of its additions and features. There are two 100 AMP AGM batteries with Anderson plugs both on the drawbar for the towing vehicle and another regulated inlet on the side for the 160 watt solar panel.

The control panel features an isolator, twin water tank gauges for the 120 plus 50 litre water tanks, individual fused switches plus LED power indicators and all easily explained with a functions handy sticker. The package also includes a 20AMP battery charger and plenty of low energy lighting and charging options with strip lighting inside on individual switches, 12v accessory & USB socket in practical settings.

The gas system is completely plumbed from the twin 9kg bottles out front to the kitchen and features a bottle change over valve and AGA gas certification certificate. There’s even a portable Country Comfort gas hot water service supplying a nice hot shower at the end of a long day’s excitement. Around to the driver’s side of the tub we find a ripper three stage fold over boat rack that is capable of loads up to 150kg and tilts all the way to ground for easy loading and unloading.

The Austrack boys sensibly pointed out that it makes a great clothes line when the water toys are in use! Austrack boast that many trailers offering far less than the Savannah X retail for well over $30,000 and I must agree with them – their retail is only $23,990.

MISSES -Not much to dislike!

Austrack describes this package as the ‘burger with the lot’, and to that end I reckon they’ve nailed it. Loads of storage, excellent provisions for time spent off the grid and some nice comforts like plumbed hot water.

The Savannah X’s unique rear slide option definitely sets it apart from the crowd. While the idea isn’t uncommon, they’re typically marred with complicated pole setups that make the whole thing more trouble than it’s worth.

The Savannah X proves you can have your cake and eat it too. From go to woah the extra bed adds less than a minute or two work to the setup time.

1. Suitability for intended purpose
A well-equipped family camper
2. Innovation
Well thought out with lots of well prioritised choices on fitout – offset internal spreaders to bring support to outer edge of canvas
3. Self-sufficiency
160 watt solar with 2 x 120Ah batteries plus 2 x 4.5/9kg gas – 170L of water in two tanks is good
4. Quality of finish
Care and attention throughout – baked enamel body with polished stainless trim
5. Build quality and construction
A lot of attention to detail
6. Bush-ability
Good ground clearance, plenty of water and electrical capacity – would prefer a DC-DC charger to be included (despite belief that most customers don’t need it) and 6mm cable to Anderson plug to be 6 B&S but it does include a 1500 watt pure sine wave inverter – fully adjustable independent suspension – rear recovery points – underbody deadener
7. Specifications and comfort
Good set-up for a family with capacity to sleep up to six – includes gas instant hot water – 75L fridge/freezer, toilet, all walls and floor – included sealed bag for canvas makes better use of internal storage – three gas outlets (kitchen/shower/rear BBQ) – internal window awnings – rear bed can be double or queen by shifting of cushions – digital TV tuner/DVD on post included Bluetooth sound system
8. Ease of use
Lot of spreader bars and poles (34) with added time to pull out the rear bed extension would become a wearying set-up – needs leg under kitchen but has stop to prevent kitchen accidentally sliding back into camper
9. Value for money
A lot of camper for the price
10. X-factor
Looks good, feels good, basically well equipped

We can deliver your new Austrack Camper to you to most capital cities in Australia and northern Queensland. Check out our Events page to see if we are coming to a town near you for one of the many camping expos we attend each year. Also check our Distributors page to see if we have a local dealer in your area. NB - These prices are a rough guide and are for all camper trailers. Please contact us for a quote or for more information.  These prices are a guide and subject to the type of camper purchased.